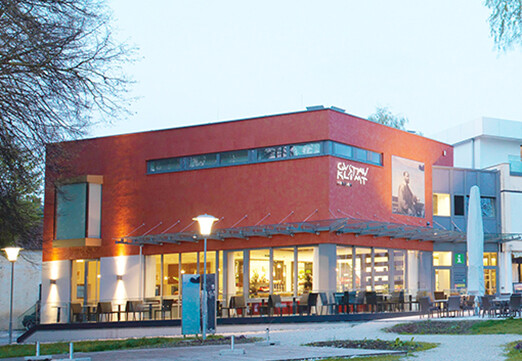 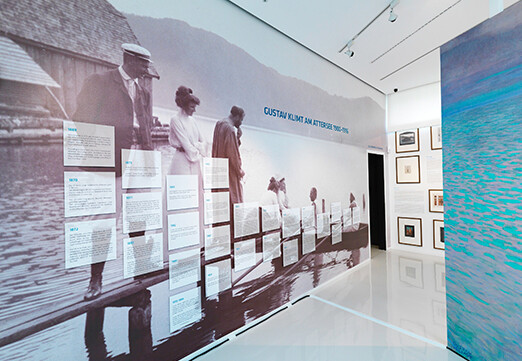 In the 2020 season, the closeness to nature and artistic nature of the painter genius and his contemporaries - from Alfons Mucha, Franz von Zülow to Kolo Moser - was the focus of the special exhibition "Floral Worlds - Flourishing Jugendstil". Facsimiles of the most famous landscape paintings by the Art Nouveau master offered detailed insights into Klimt's "floral world" and demonstrated the diversity of his unmistakable, colorful "painting mosaics". In addition, the exhibition highlighted the innovations in floral handicrafts and the role of Austria at the 1900 Paris World Exhibition.

Despite the Covid-19 pandemic and the shortened season, we can look back on a successful time with great events and the granting of the Österreichisches Museumsgütesiegel.

The season started on May 1, 2019 with the multimedia presentation about Gustav Klimt's summer stays at the Attersee. From June 21st, the special exhibition “Floral Worlds - Flourishing Jugendstil” curated by the Klimt Foundation was dedicated to the artist's closeness to nature and the Art Nouveau phenomenon in Vienna around 1900.  As an exclusive highlight, the Klimt original painting “Litzlbergkeller” (1915/16) was presented at its place of origin, the Attersee, up to Klimt's 157th birthday on July 14, 2019.

The Virtual Reality Experiment "Klimt's Magic Garden" by Frederick Baker, presented in 2018 on the 100th anniversary of Gustav Klimt's death at the Vienna MAK - Museum of Applied Arts, was available to visitors in the Klimt Center until August 18, 2019 (on weekends).
The region has been honoring the famous artist with the Klimt-Artist-Trail in public space since 2003, while the Gustav Klimt Center was opened in 2012. Since the beginning of summer 2019, this area has offered another outdoor attraction for locals and guests to discover the traces of Gustav Klimt on the Attersee: the world's first Gustav Klimt Garden. Six paintings by the master, created between 1907 and 1916, served as the basis for the design of the approximately 100 square meter large flower beds with water lily basins and rose hedges. The project, conceived by the Klimt Foundation and its regional partners, was nominated and funded by the Federal Ministry for Sustainability and Tourism in 2018 as one of six tourist lighthouse projects in Austria.

Selected facsimiles of Klimt's Attersee landscapes, including the most expensive one on the art market since 2017, presented Klimt's painterly work phases during his stays in Litzlberg, Kammer and Weißenbach. In the graphics cabinet, visitors discovered the world artist primarily as an erotic draftsman; in his designs for the mosaic frieze of the Stoclet Palace, which are permanently installed in the Klimt Center as large-format reproductions, they explored Gustav Klimt's connection to nature. Moreover, on the occasion of the 100th anniversary of the death of Gustav Klimt and three other artistic personalities from the turn of the century - Egon Schiele, Kolo Moser and Otto Wagner - these pioneers of Viennese Modernism and their connection to the Salzkammergut received a special focus.
The renowned Viennese artist Nives Widauer added a contemporary accent to the exhibition with her video installation “Time Tunnel”. Widauer's installation provides unique insights into the historicist Villa Paulick in Seewalchen am Attersee, which was built in 1877 and became known as a stimulating meeting place for Gustav Klimt and Emilie Flöge. The artist combines a tracking shot from the bottom of the Attersee, through the boathouse, through the garden and through the rooms of the famous Villa Paulick to her tower and ends with a spectacular view over the roof gable. Mounted in a plate camera from the turn of the century, visitors watch the video as if looking into the interior of a memory room.

During the Gustav Klimt Center’s sixth season, the Klimt Foundation celebrated the Jugendstil artist’s 155th birthday and presented the periods of his painterly oeuvre during his sojourns through select original-size facsimiles of Klimt’s Attersee landscapes, including the most expensive one sold to date, the work “Cottage Garden” created in 1907. Another emphasis was on the 140th anniversary of the erection of the Villa Paulick. The historicist villa in Seewalchen, which to this day is considered a gem of villa architecture on the Attersee, was an influential meeting-place for the artist couple Gustav Klimt & Emilie Flöge. During the summer months, visitors were given the opportunity to explore the now privately owned villa on guided tours with art historians from the Klimt Foundation. This journey of discovery was supplemented with further performances of the play “Süße Wiener Dunkelheit / tiefheller See” at the Villa Paulick.

For its fifth season, the Gustav Klimt Center operated by the Klimt Foundation decided to shine the spotlight for the first time on the woman by the side of the famous holiday guest: the fashion designer Emilie Flöge. The relationship between Gustav Klimt and Emilie Flöge continues to be the subject of speculation to this day. Precisely 100 years after their last summer sojourn spent together on the Attersee, the exhibition featured exclusive messages and memorabilia from their lives in Vienna and Upper Austria between painter’s frock and reform dress, and for the first time also incorporated contemporary contributions by the artists Bernadette Huber and Irene Andessner. Clara Gallistl’s play “Süße Wiener Dunkelkeit / tiefheller See” commissioned by the Klimt Foundation premiered at the historicist Villa Paulick in Seewalchen as a reading with musical accompaniment.

During the Gustav Klimt Center’s fourth season, the Klimt Foundation presented an unusual oil painting of two ladies from the Foundation’s own collection. An entry in the newspaper Neue Freie Presse dated 7th September 1907 documents the completion of this work during Gustav Klimt’s holidays on the Attersee, and in 2015 the painting finally returned to the place of its creation for the first time in over 100 years. The two elegant ladies “in winter suits” were accompanied by another young lady, Gertrude Flöge, the last family owner of the Villa Paulick, with three of the five original drawings of her known to date presented together for the first time.

Since its opening in July 2012, the Klimt Center on the Attersee has hosted numerous original artworks. In cooperation with the Vienna Leopold Museum, which was also responsible for the curatorial concepts of the exhibitions shown between 2012 and 2014, two landscapes were returned to the place of their creation – in 2012 the painting “On Lake Attersee” (1900), described by contemporary art critics as “a frame full of lake water”, and two years later the work “The Large Poplar II (Gathering Storm)” (1902/03), characterized by its distinctive “trout spots”. In 2013 yet another icon from the collection of the Leopold Museum was presented on the Attersee – Klimt’s rendering “A Morning by the Pond” created in 1899 in the Salzburg town of Golling, which paved the way for all his later landscapes created in a square format.

Already in September 2003 an Artist Trail was established in honor of Gustav Klimt on the Attersee. The opening took place on privately owned Litzlberg Island and was hosted by the museum founder Prof. Rudolf Leopold and Prof. Gerhard Tötschinger. Curated by experts from the Leopold Museum, the Artist Trail served as the basis for the Gustav Klimt Center on the Attersee, which was opened just under ten years later on the occasion of the Jugendstil artist’s 150th birthday on 14th July 2012 in Kammer-Schörfling in close proximity to the avenue of Schloss Kammer once painted by Klimt.

With the opening of the center, the Artist Trail was revised and equipped with audio guides available for smartphone download or hire at the Klimt Center.

Please note: For conservational reasons it is not possible to exclusively present original artworks for the entire duration of the season.